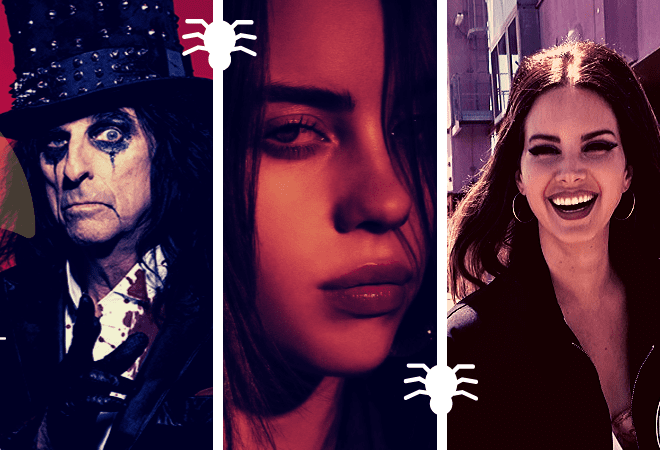 From chilling lyrics to killer beats, this selection of tracks makes a frightfully good addition to any Halloween party playlist.

‘Highway to Hell’ is the title track of AC/DC’ s 1979 album. The anthemic chorus made it a huge radio hit and was also the band’s first song to chart in the US.

The godfather of shock-rock made it all the way to the No . 2 spot on the UK singles chart with this epic 80s hit.

Sympathy For The Devil – The Rolling Stones

All hell broke loose when this controversial number hit the airwaves back in the 60s, adding to the particular Stones “bad boys” reputation, despite Jagger claiming that the song was penned about the evils of mankind. Woo woo!

Creep was first released in September 1992 as the band’s debut single. It was however only after the song’s success across Europe and the US that it was re-issued in the UK almost a year later, landing at No. 7 on the Official Singles Chart.

The hardcore techno single was the third to be released from ‘Music for the Jilted Generation’, peaking at No. 13 on the UK singles chart.

Typically the era-defining song with its sinister sound and reggae bass line captured often the spirit of the country when it hit the charts at a time of unrest, unemployment and riots.

‘Monster’ was the 3rd UK single lifted from the Welsh band’s debut album ‘Not Accepted Anywhere’.

This King of Pop’s spooky mini-movie cost half-a-million dollars, which at the time, earned it the title of most expensive video ever.

The Hills : The Weeknd

Not only was this huge track accompanied by a dark, eerie music video, both the song title and lyrics give a nod to Wes Craven’s cult horror classic ‘The Hills Have Eyes’.

When recording the track at the Hit Factory in Miami a speaker literally caught fire – now that’s what we call a killer hot beat!

RiRi once described the song to be about mental anguish, anxiety and confusion, with the lyrics describing a person trying to fight hallucinations and abnormal feelings. It’s one scary tune with a creepy video to match.

This mystical number was covered by American actress Jessica Lange in an episode of American Horror Story: Freak Show.

This breakthrough single climbed the charts all over the world and tells the tale of a girl who happens to be super sweet and, you guessed it, a little bit psycho.

We’ve seen some creepy stuff from Billie, but this track and its movie takes the cake with its serious “monster under the bed” vibes. Careful.

Have you got a track to add to our Halloween playlist? Tweet us @gettothefront and share it with us!